Large global banks continue to waft through a maze of ways to achieve long-term earnings growth, even while they splash headlines of billions in profits and rebounding stock prices.  ROE is the way shareholders, bank boards and bank managers assess performance, and big banks can't get their returns-on-equity (ROE) to budge a bit.

There was once a time when big banks like Goldman Sachs and Morgan Stanley (when they were pure investment banks and broker/dealers) and the historically commercial banks like Bank of America and Citibank could generate returns above 13-15% or push returns toward 20% quarter after quarter. Those were the days when banks could do it all--lend money to small businesses, arrange mortgages, trade commodities, invent new derivatives, and operate like quasi-hedge funds. They took big risks (paying for those risks later during the financial crisis), but they could strive for high returns, ROE's that eclipsed 15% now and then.

Times have changed.  Laws have changed.  And regulators have been persistent in forcing banks to reduce the risks on their balance sheets and eliminate risk they take in hedge-fund-like trading and ensuring banks dare not use customer deposits to fund questionable balance-sheet positions or exotic activity.  Their biggest tools:  (a) Require banks to hold more and more (and more) capital and follow thousand-page rule books regulators devised (via Dodd-Frank legislation). (b) Take advantage of the discretion they have as rule-makers to increase the capital requirements when necessary.

The capital rules are tough, challenging, detailed, and sometimes hard to comprehend.  Give the big banks credit.  They whine, and they fret. Their CEO's and presidents craft long essays in financial reports explaining the difficulties in meeting requirements. But for the most part, they cooperate and comply.

More capital and less risk, however, mean lower ROE's and make it nearly impossible for senior bank managers to push ROE's toward, say, 12%.

Take the most recent quarter.  Big banks announced large amounts of earnings in the second quarter. JPMorgan Chase and Wells Fargo, for example, topped $5 billion each.  A better economic environment helps.  More confidence among their risk managers boosts loan volume and gets the loan machine churning again.  Investment-banking and asset-management fees have increased.  Bank administrators have squeezed out costs in just about every function, activity or process that exists.

In many cases, net revenues among banks are growing, but not in leaps and bounds. The increases are slight bumps upward--from net-interest income to fees.  Banks have become creative and obsessive about finding new fees to offset revenue declines from the trading they won't be permitted to do. Services they once performed for customers at their pleasure are now subject to lengthy fee lists.

They head into the second half of 2015 wishing they could have done better, but happy and giddy they generated percentages that hover about 10% because any number around and above 10% results from managing effectively dozens of factors--including regulators' persistent requests to add more capital to the ROE denominator.

They know they are fortunate, too, because much of the ROE they report resulted not from surges in revenue, but from successful cost-cutting campaigns.  JPMorgan Chase and Wells Fargo, for example, are banks of similar size; they have different strategies, scopes and businesses.  They overlap in some areas (credit cards, small-business banking, and mortgages, e.g.). Wells Fargo stays within U.S. boundaries and long ago elected not to immerse itself in derivatives and trading in the way JPMorgan does.

Both banks, however, have experienced respectable, but slow growth in net-interest income and overall fee income the past few years.  Both, especially JPMorgan Chase, won't be able rely on substantial income from trading bonds, equities and derivatives in the way they prefer.  For both, business is better, and it's growing, but in inches, not miles.

To boost profits in the way they have done in the past year or so, they have conducted rigorous, aggressive cost-cutting campaigns on top of being clever about where they can charge fees.  Cutting costs, rationalizing businesses, and improving efficiencies in processing, operations, and product delivery across the board have had a favorable impact on the bottom line. (Some of those cost reductions have been offset by substantial increases in expenses for risk management, legal and compliance, but not enough to cause earnings to suffer too much.)

Banks still must wrestle with ongoing challenges.  Bank of America clocked in at 9%, a solid output after it struggled with capital requirements, stress tests, and balance-sheet restructuring the past year. It pat itself on the back, yet still felt it necessary to shake up top management as it marched to the 2015's second half.

Managing a complex, globally entrenched financial institution is as tough as ever. Their balance sheets are constrained.  They must maintain billions  more in capital, atop the hundreds of billions in capital they already show on balance sheets. They must now prove to regulators they are liquid, showing substantial amounts of calculated cash or cash-like assets that can't be used to make loans.

They have restrictions on leverage, so onerous that some banks like JPMorgan Chase are turning away large corporate deposits--those same funding sources that banks since the beginning of time have salivated over.  (Many banks will accept the deposits, but will charge fees or penalties for doing so. Some hedge funds, for example, may be required to pay fees to deposit excess cash at some banks.)

1)  How much more in costs can they wrench from large, complex organizations without jeopardizing service, risking operations and technology glitches, and losing employee talent in big numbers?

2)  From where will revenue growth come, if they can no longer rely on the occasional spikes like that from trading income, sometimes a result of trading in new, exotic products, often a result from proprietary activity?

3)  What will the bottom lines amount to once interest rates start to rise? What impact will rising rates have on earnings?

4) Is it worth the hassle and compliance complexity to maintain a trading business of any kind to gain incremental revenue?

These are mere snapshots of challenges just to get ROE to a 10% threshold.  And that might be why some banks, like Morgan Stanley, didn't lament reporting a 10% ROE.  They tooted their horns.

This so-called "fear index": Are investors interpreting it correctly? When markets are calm and stable and investors are beati... 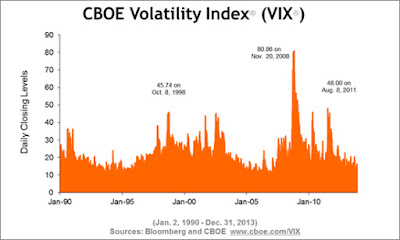